St Ives Food and Drink Festival, supported by Carbis Bay Holidays, has revealed the full Chef’s Line up for the 2019 event, including the exciting new addition of the Asado Fire Pit by Country Fire Kitchen, sponsored by Hubbox.

The Asado Fire Pit brings the thrill of authentic outdoor cooking over fire and invites top chefs to share their skills on this very different stage. Audiences will witness a wide range of techniques for cooking meat, fish and vegetables on the open fire.

Tom Bray of Country Fire Kitchen builds fire-cooking equipment for both domestic & commercial settings and will be supplying the kit as well as demonstrating. He said: “It’s a really brilliant way to cook for families and large groups and can be done anywhere, from the beach to your back garden.”

Jackson Bristow of Nancarrow Farm is used to putting on feasts inspired by the fire-pit and by the meat and seasonal produce on the 100-acre organic farm. As happy on the farm as they are in the kitchen, Jack and the team at Nancarrow are committed to celebrating the whole of each beast, alongside what’s best in the garden & hedgerows at that moment.

Stephen Lamb has been a lynchpin of the River Cottage operation for over a decade. He’s an award-winning author and teacher who specialises in curing and smoking meat. His fantastic presenting style will make this one not to miss.

Adam Banks & Elly Owen of Fifteen Cornwall will also be dropping in to demonstrate, pairing Adam’s dishes with suitable wines to accompany the unique smoky flavours of the fire, and Kathy Slack will be popping over from the main stage to cook vegetables on the fire.

There’ll be tons of talent and a host of different flavours and styles of cooking over on the main Chef’s Demo Stage too, with sessions taking a culinary tour of Cornwall and beyond. The full line-up can now be viewed at: https://stivesfoodanddrinkfestival.co.uk/chefs-demo-stage/

Audiences can take a foodie journey across Cornwall and the UK, learning from Michelin-starred seafood-lovers like Driftwood Hotel owner Chris Eden; Rick Stein Seafood Restaurant Head Chef Stephane Delourme, and Great British Menu winner and Redruth-boy Tom Brown, whose recently opened Cornerstone in Hackney is receiving rave reviews from the critics. There’s also a slot from Heston Blumenthal’s right-hand man Ashley Palmer-Watts who’ll be demonstrating the cooking that’s seen him work as Head Chef at three Michelin-starred The Fat Duck as well as the Dinner by Heston Blumenthal restaurants at the Mandarin Oriental in Hyde Park, in Melbourne, Australia and soon to be in Dubai. 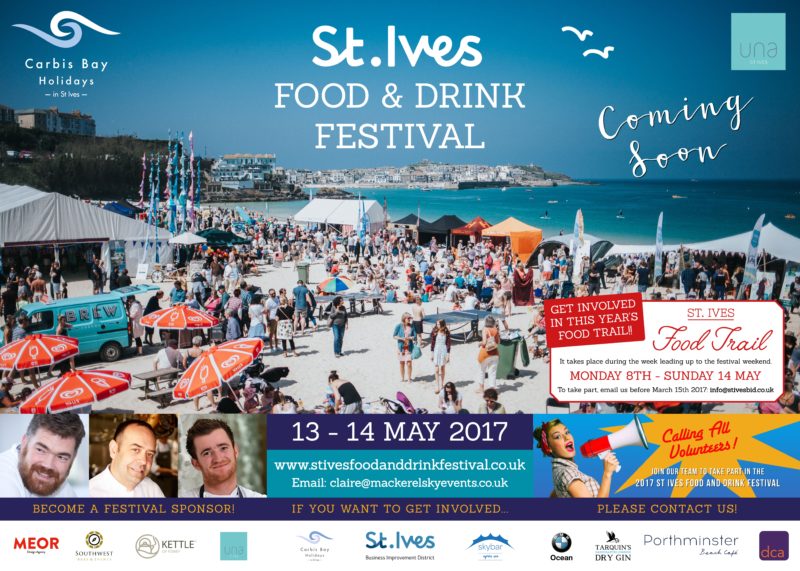 There’ll be an exploration of the very best locally sourced ingredients from Cornwall and beyond with the likes of Ross Geach, head grower at Padstow Kitchen Garden; grow-your-own author Kathy Slack and farm-to-fork ambassador and Harbour Hotels Executive Chef John Pollard.

And there’ll be expeditions to discover the flavours of tropical Mauritius with Selina Periampillai; the Mediterranean with Trelowarren’s Jeffrey Robinson and the spices of India with Hersha Patel.

Vegan cooking enthusiasts, and those who simply want to dabble now and then, will love the accessible cooking of author and chef Áine Carlin who passionately believes in vegan food being for everyone and uses fresh, easy to source seasonal ingredients to create her delicious dishes.

Keen bakers should definitely check in for the demo by renowned cakeologist and TV presenter Juliet Sears. Over the years Juliet has made edible creations for thousands of people, including celebrities Sir Ian McKellen, Bryan Adams, Prince Harry and Kate Moss. Viewers of ITV’s This Morning will recognise her as one of the regular presenters on the show.

Chef and Home Economist Kim Somauroo works on some of the biggest Food Festivals in the UK, including curating both stages at St Ives. He said: “I’m really excited about the chef line up this year. There will be such a diverse range of demos, with different cuisines & styles, from an amazing selection of chefs on the Chef Demo Stage, from Cornwall & beyond. It’s also very exciting to be introducing the Asado Fire Pit this year, which again will have a fantastic line up of live-fire chef demos.”

Daytime content at the Festival, including all the Chef’s Demos, is free. The evening sessions are ticketed and a Gourmet ticket will give you access to all three evening sessions as well as priority seating in the Chefs’ Theatre. Tickets are now on sale at: stivesfoodanddrinkfestival.co.uk