Spot the Seagulls in St Ives This Summer.

A colourful and fun Seagull Trail to help educate people about seagulls and how best to live alongside them.

A colourful and fun Seagull Trail around the Cornish seaside town of St Ives is being launched this summer as part of a campaign to help educate people about seagulls and how best to live alongside them.

The St Ives Business Improvement District (BID) has dreamt up the creative initiative for its annual summer campaign as it works to help tourists and locals alike understand gull behaviour, in a bid to avoid any unhappy encounters where hungry Herring Gulls swooping to grab food leads to negative incidents.

Twelve eye-catching seagull models are being placed at bird’s eye view in key locations around the town, with each one decorated by a local artist, school, playgroup, business or neighborhood club, to make them distinctive, colourful and collectively representative of the St Ives community which makes the town unique.

Maps showing the locations of the gulls will be available to pick up from local businesses so people can follow the trail to spot all 12 of the brightly painted seagulls. Each will be accompanied by a letter, and these 12 letters will spell out a phrase that can be written onto the space featured on the trail map.

Completed trail maps presented to the Tourist Information Centre will win their owner a bag of themed traditional seaside sweet treats as a reward. Trail maps will also contain some top tips on how to avoid negative encounters with gulls and advice on how to understand gull behaviour – including a guide to gull language.

Carl Lamb, St Ives BID manager, said: “Seagulls are part of the fabric of St Ives, whether you like them or not, and are as much a distinctive feature of the town as our famous seafront.

“We fund projects to support local businesses by helping to protect people from gull attacks, such as installing ‘don’t feed the gulls’ signs and deterrents like seagull spikes.

“But we also work hard to help people understand how to live happily alongside the seagulls, and show them how to avoid negative encounters – often by educating visitors, and locals, about the danger of feeding the gulls, which can encourage them to snatch food.

“Our Summer Seagull Trail will help to do this, as well as being a really fun celebration of the gulls, and the community of St Ives which they belong to.

“We’re delighted to have so many talented local artists on board, as well as groups of school children, community organisations and even some local tattoo artists.

“The finished trail will be a really colourful attraction in its own right, providing a fun, family-friendly activity to take you around St Ives looking out for the brightly painted seagulls.”

This year’s campaign follows a series of award-winning summer initiatives to help raise awareness of how to understand and live with gulls.

Last year the BID opted for a cutting-edge digital approach and launched a Snapchat Geofilter with a ‘Don’t feed the gulls’ message, which was used by more than 13,000 people.

In 2016,  ‘The Daily Gull’ newspaper was printed –  a large sheet of greaseproof wrap for takeaways which featured hints and tips on understanding gulls, to help keep people safe while they enjoyed their fish and chips on the seafront.

St Ives is renowned for its resident colony of gulls, the most familiar of which is the Herring Gull with its white belly, grey back and black and white wing tips.

An estimated 240 pairs of Herring Gulls call St Ives home, and the birds sometimes snaffle food from unsuspecting passers-by, a problem made worse over the years by people deliberately feeding the gulls, which has encouraged them.

Seagull expert and bird scientist Peter Rock carried out research into the feeding habits of St Ives resident gulls by fitting the birds with GPS tags, offering insight into how best people can live alongside them and reduce negative encounters.

Peter has provided some top tips on how man and bird can enjoy their time together in St Ives and these are printed on the Seagull Trail maps.

“People either love or hate seagulls but whatever your feelings, these gulls have lived in St Ives for a long time, over 30 years, so we all need to become more aware of how these creatures behave so we can learn to live together more successfully,” Peter said.

“Tidying up after yourself, not feeding the gulls, and knowing the different gull calls and noises and understanding what they mean can all help to reduce negative incidents and enable people to live more happily alongside the gulls.”

Peter is supporting the Seagull Trail campaign, alongside many local businesses and community groups.

Local artist Katrina Slack said: “It is wonderful to be involved in a campaign that will help raise awareness about this much misunderstood birds. Hopefully the campaign will reveal more about the Herring Gull and what is happening to their natural habitat and food sources, as well as finding ways to avoid confrontations with them over our food.”

Keran Sunaski Gilmore, a St Ives-based artist also decorating one of the seagulls, said: “I am thrilled to be part of this exciting campaign that will help to raise awareness of seagulls in our town.

“Seagulls are a huge part of life in St Ives and it is so important that we start to show people, both local and visitors, how to live side by side with them positively.”

The 12 decorated seagulls are being sited at supportive venues and businesses, on rooftops, in shop windows and outside well-known venues and popular shops, creating a trail which will stretch through the town taking in Tregenna Place, the Drill Hall, the harbourfront and arcades, Porthmeor Beach and Fore Street.

The trail is due to launch by the end of July in time for the school summer holidays. 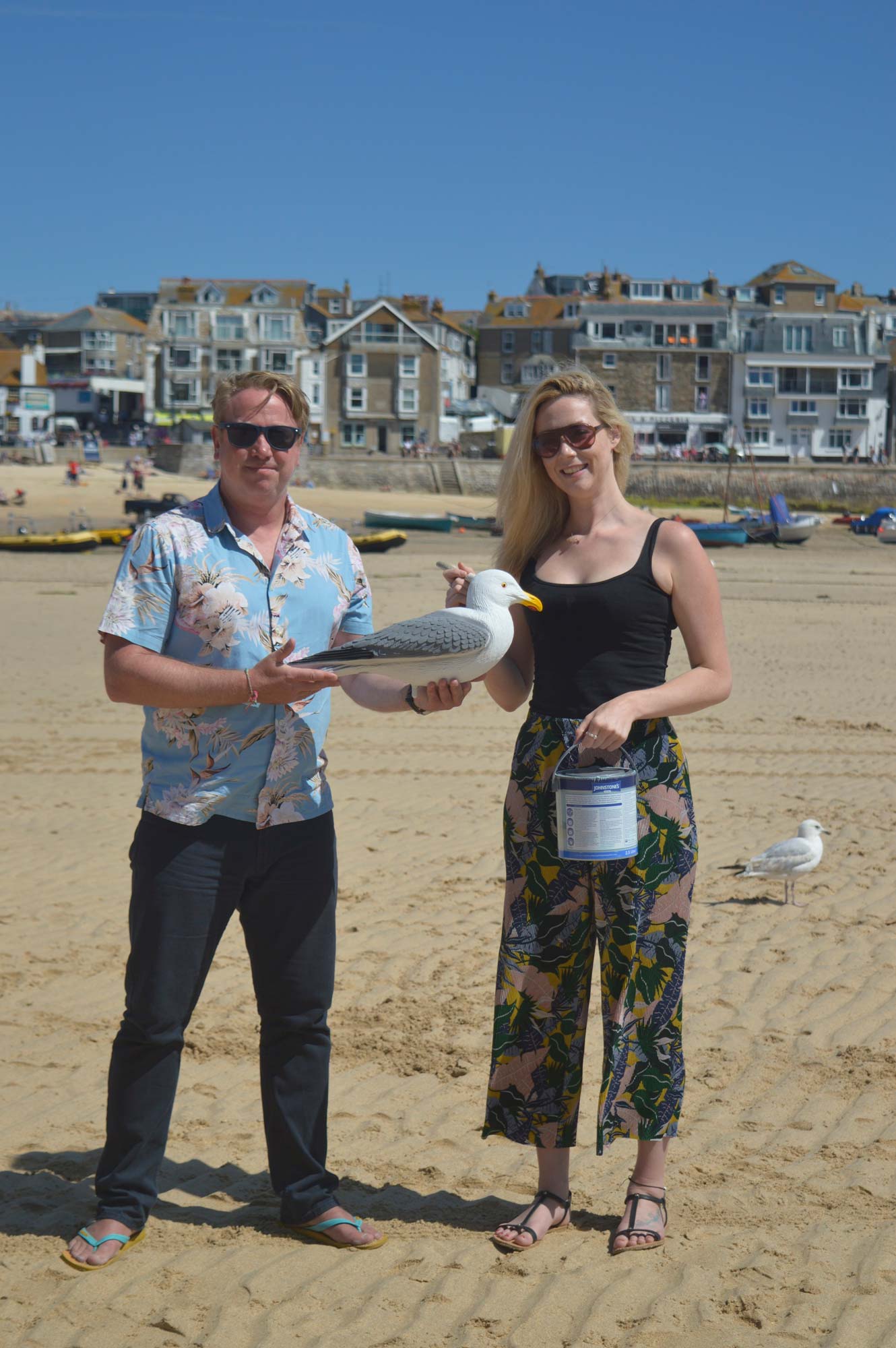